As a wedding DJ with 20 years of experience, Jody at Professional Wedding DJ has participated in a lot of weddings, and he can therefore say for sure that a themed wedding is a smart idea if you want your big day to stand out from all the other weddings. If you want to make your special day original and personal, this is a good opportunity to find something different.

Theme inspiration can come from the location: for example, an outdoor wedding in a farmhouse can inspire a country chic style, or if you are exchanging your vows on a beach, you might choose a maritime theme.

But the best way to decide upon a wedding theme is by starting with your passions: like travelling, film, or music!

Here are some examples that the team at Professional Wedding DJ have created for music themed weddings. Choosing a musical genre as the wedding theme also generates many decorative ideas for the invitations, the head table, tables names, even favours—all these elements can be linked to your theme! 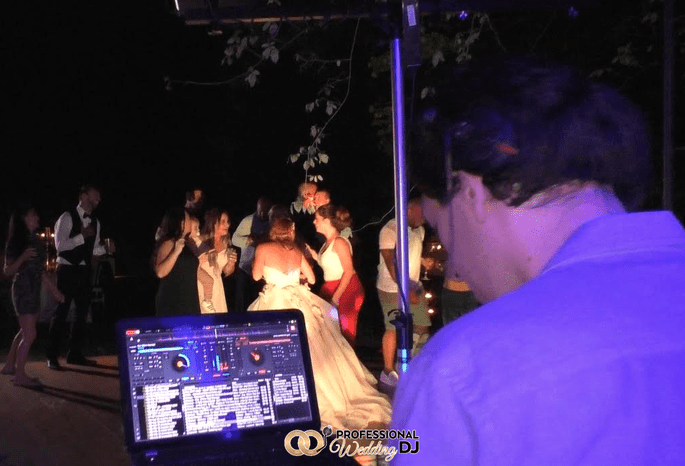 A 30s wedding theme means fascinating fashion – long, beaded dresses, elbow length silk gloves, sparkling jewellery, a nostalgic atmosphere and the emotive sounds of jazz and swing made in the USA, like Louis Prima, Glenn Miller, and many others. With the right music, your wedding party will simultaneously be sophisticated and brilliant – an electro-swing combination is a great way to get everyone on the dancefloor. Fear not: nothing about this theme is boring or old fashioned.

A different mood is associated with a 50s theme: happiness is the keyword; happy music and eccentric clothing characterised that period, including lace, corsets, long gloves, as well as rock ‘n’ roll by Chuck Berry and Jerry Lee Lewis.

50s television and cinema provide great fashion and music inspiration – Grease and Happy Days represent the collective images of the 50s. Their soundtracks must be played if you decide upon a 50s theme. 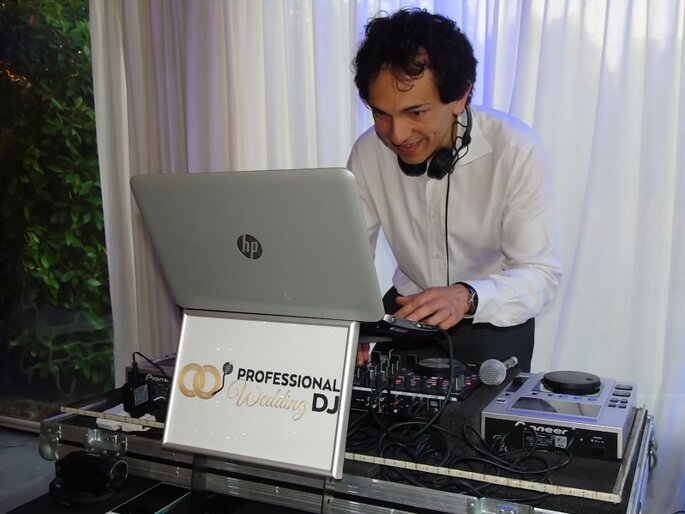 The 70s were full of interesting developments, especially for dance music. Disco was born in this decade and the range of genres spanning disco is huge, so there is no chance of anyone getting bored.

For the decoration (strobe lights are mandatory) you must take inspiration from Saturday Night Fever.

80s themed weddings are colourful, over the top, and very popular in the States.

The 80s had a great influence on music and style. The emergence of video clips began to link images with music – they were often excessive, funny, and provocative.

80s symbols such as cassettes, boomboxes, and Walkman are re-emerging in popular culture and, above all, 80s music is making a comeback and inspiring new songs. Thanks to this, your wedding will be both vintage and trendy.

For the music, the staples are Frankie Goes To Hollywood’s “The Power of Love”, or one of the many “new romantic” songs by Spandau Ballet.

For dancing, Madonna’s “Like a Virgin”, Cyndi Lauper’s “Girls Just Want To Have Fun” and Rick Astley’s “Never Gonna Give You Up” are just three examples amongst the numerous hits that marked this incredible era. 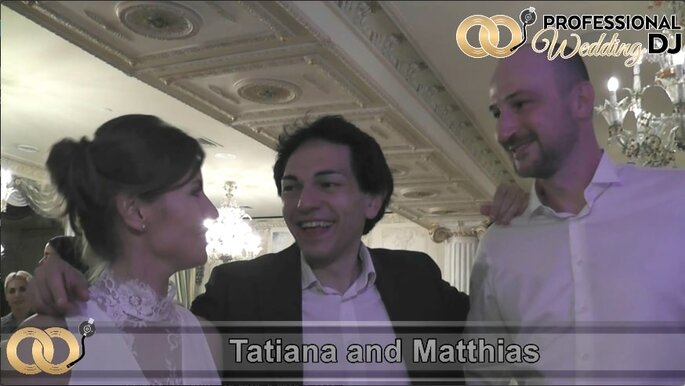 Many couples passionate about rock music think their favourite songs are not suitable for their wedding. But that is not true.

With the right musical interpretations, you can bring rock to every moment of your wedding party. For the ceremony, a soft reinterpretation of your favourite rock song by a string quartet could be, for example, the original idea that you are looking for. Or, if you want to set the tone for your wedding right away, Queen’s wedding march is a rocking choice for the bride’s entrance.

The choices for the first dance are plenty, and full of truly romantic ballads: “I Don’t Wanna Miss a Thing” by Aerosmith, “Wind of Change” by Scorpions, and “Always” by Bon Jovi are just some of the most requested songs, even at non-themed weddings

A rock theme is also great for decorative inspiration: place cards in the shape of guitars and a photo booth to turn your guests into “guitar heroes”—both simple and fun ideas for your special day.

Last but not least is a very original wedding theme chosen a couple of years ago by fashion blogger Chiara Ferragni and her husband, Italian rapper Fedez. The location was the Dimora delle Balze estate in Southern Italy, and the theme was Coachella Music Festival.

The Coachella Valley Music and Arts Festival is held in California every year – a huge event combining art and music. Over the last few years, fashion has become a facet of the festival and a real “Coachella” look has developed.

Pop stars and music legends such as Daft Punk, Post Malone, Cardi B, Jamiroquai, Beyoncé and many others have performed at the festival over the years, but space is also reserved for independent and alternative music. As well as the musical performances, immersive art and design installations by the most interesting artists on the international scene feature at the festival.

For her wedding, Chiara Ferragni decided to replicate the mood and atmosphere of the Coachella party, including the guest dress code, and even hiring a Ferris wheel, a symbol of Coachella festival. 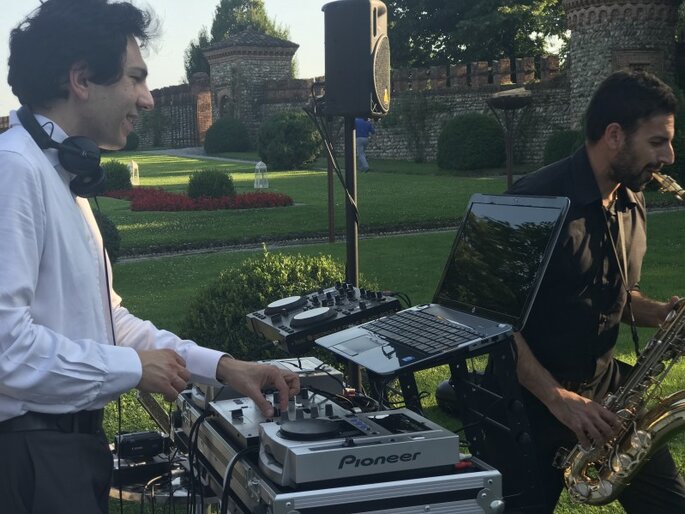 So, now that you have been inspired, go and plan your music themed wedding celebrations! We would love to see what you come up with, so do tag @zankyouweddings_uk and @professionalweddingdj in your wedding photos on Instagram.

VM GROUP by Victor Music selects the best artists to create a lively atmosphere for your wedding!

Music and animation
12 Apr 2021
With VM Group Events your event will be designed and created down to the smallest details, tailored to your needs and desires, in order to provide you with unique, exclusive, and original music entertainment.

Give Life To The Wedding Of Your Dreams With CMBNOIZE

Music and animation
12 Apr 2021
What could be better than an expert and varied musical selection for your special day? Nothing! Find out more...

Iknos Party Eventi: The Highlight Of Your Big Day

Music and animation
24 Mar 2021
Aldo of Iknos Party Eventi will transport you to the depths of music. He will have everyone dancing their hearts out on your wedding day!
Video

Do You Need Music For Your Destination Wedding In Italy? Then You Need Bkatch Events and Music.

Music and animation
11 Dec 2020
We at Zankyou had the lovely opportunity to chat with Barbara of BKatch Music and Events to find out more about this genius group, about their origins, and their love for weddings.

Mike Megaro DJ: When Music Engages Every Element Of A Wedding.

Music and animation
16 Nov 2020
Mike Megaro DJ will be the music mastermind of your wedding day. He will play the tunes you and your guests love to create an unforgettable event.

Music and animation
6 Nov 2020
Music is one of the key elements of weddings that often gets left until the last few weeks of planning. Don't forget that music has the power to soften or enhance all kinds of sensations. So if you want the best possible soundtrack for your wedding, follow these five simple steps.

Choosing Your Wedding Music: Live Band, DJ or Both?

Impress Your Wedding Guests With The Event Music Planner

Music and animation
5 Dec 2019
Your wedding day is more than just the walking down the aisle and exchanging of vows. It's a celebration for both you and your guests, so make sure to give them something worth remembering with The Event Music Planner.