Kaley Cuoco, one of the most popular television stars (and the second highest-paid actress in the world) thanks to the award-winning series The Big Bang Theory, has married again. This time, the lucky man is Karl Cook, a jockey, and heir to a multimillion dollar fortune (his father is one of the directors of eBay), who she has been dating since 2016. 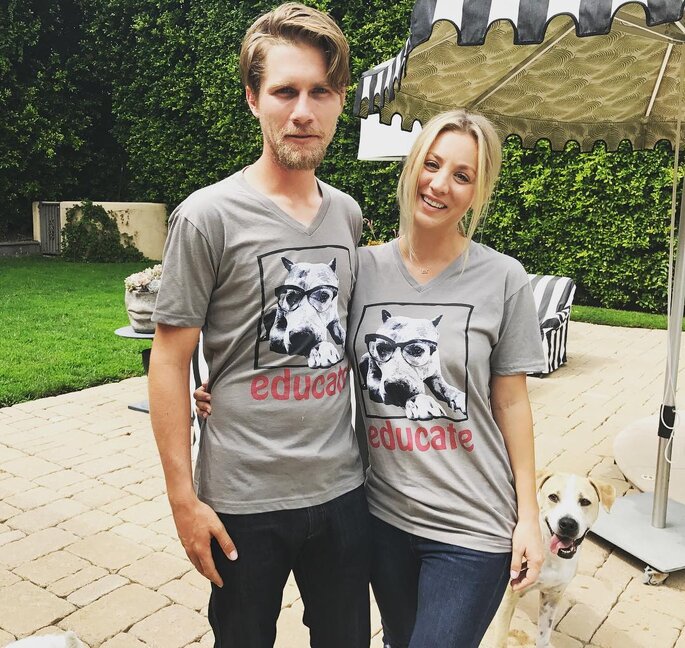 Their wedding was unique – one of the most special in recent years. This was achieved firstly through the presence of the cast of the series, now friends of the famous actress, at the wedding. Workmates such as Johnny Galecki (Leonard Hofstader) and Mayim Bialik (Amy Farrah Fowler) have shared their reactions and photographs of the day on social media; the first, Kaley’s on-screen husband and real-life boyfriend for two years almost a decade ago, uploaded a shot with the following message: “Deepest congratulations to the newlyweds. Love you both so much. So moved by tonight,” he wrote on Instagram.

The actress wore two very original dresses during the wedding. The first of them, in a more traditional and elegant style, consisted of a gown with lace flowers which she complemented with a train in the same style. Accompanying the dress, she showed off an upswept hairdo in a sophisticated and attractive messy style.

The second look was much more distinctive: a white lace jumpsuit moulded to her figure, with a loose ponytail which reflected the more casual look of the second outfit. Cook, in a simpler look, donned an elegant black suit. 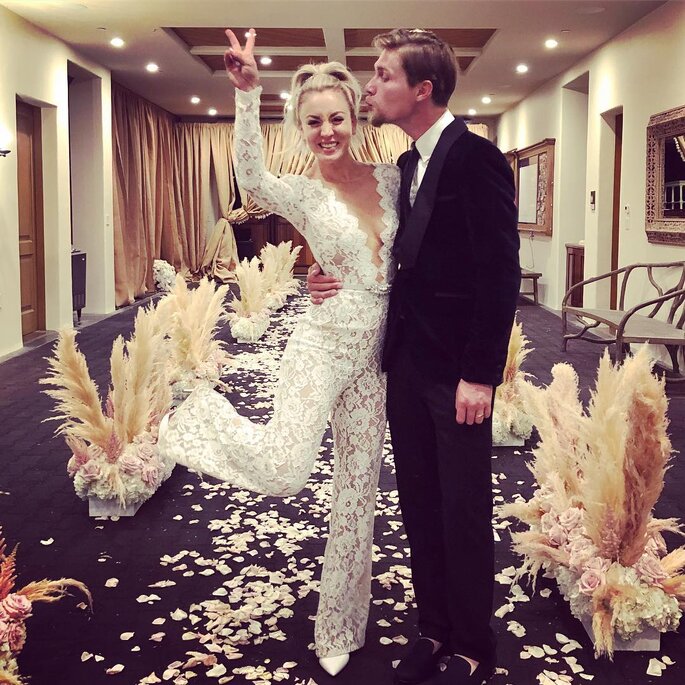 Another detail that has been released regarding the wedding was its chosen location. The wedding took place in the countryside, specifically on a country-house estate in San Diego (California), where family, friends, and colleagues gathered for the spectacular event. The bride’s sister, Briana Couco, who is also an actress and a singer, was the officiator at the ceremony – in one of the most emotional moments of the day.

Kaley Cuoco and Karl Cook share a passion which, aside from their professional commitments, occupies most of their time: horses, and equestrianism. Both compete in this discipline, and did not miss the opportunity to make various nods towards it during the wedding. For example, the couple decorated a stable with petals and flowers, and there did one of the most original photo sessions in living memory.

The actress became engaged to Karl Cook at the end of 2017, when the jockey proposed on her 32nd birthday. Kaley could not avoid sharing the moment on social media, with emotion and tears clearly visible in the video.

Their relationship began less than two years ago, and now, with their wedding having taken place, it has been made eternal by the hashtag (or symbol) KC2, created thanks to the synchrony of their first names and surnames. Resultantly, they have become one of the most fun couples around right now.

Six months before she began dating Karl, Kaley was divorced from the tennis player Ryan Sweeting, who she had married in 2013, and with whom she shared a love for tennis. And although the actress had claimed she lost her belief in love, she has been given a second chance with someone who appears to be her soul-mate. We wish them total happiness!