Love is art. With all its textures, passion and mood-altering capabilities, art is never an easy, or simple, subject. One thing is for sure, however, art’s presence in our society is profound, as it creates and depicts some of the deepest human emotions. At Zankyou we wanted to bring together the artistic works that best represent this feeling; works so beautiful and significant that they catch the eye of any passerby. If you’re someone interested in works of art, take a look at these pieces, and let us know what you think of them. 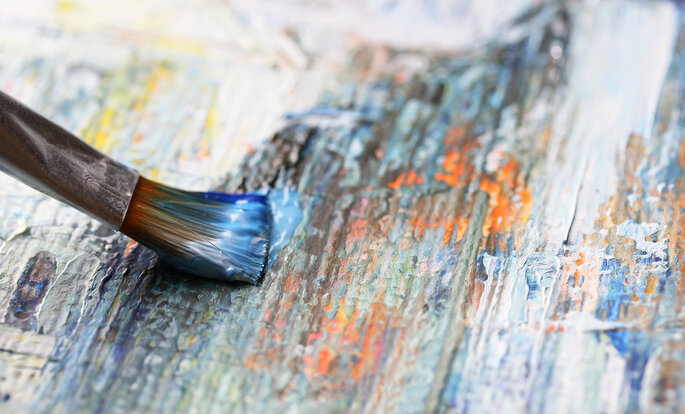 Apollo and Daphne, by Bernini

The story of Apollo and Daphne has all the ingredients of Greek tragedy. With misfortune of love and weary of the actions of Apollo, Eros decided to punish the god by piercing him with a golden arrow, which would unleash a strong love towards the first person he met: the nymph Daphne.

After a desperate persecution of Apollo, Daphne asked for help from her father, god of the river, who turned her into a laurel to save her. When Apollo was about to touch her, the body of the nymph became a trunk with her head populated with leaves. From then on, Apollo would motivate the myth of the laurel wreath, symbol of victory for great men in homage to his beloved. 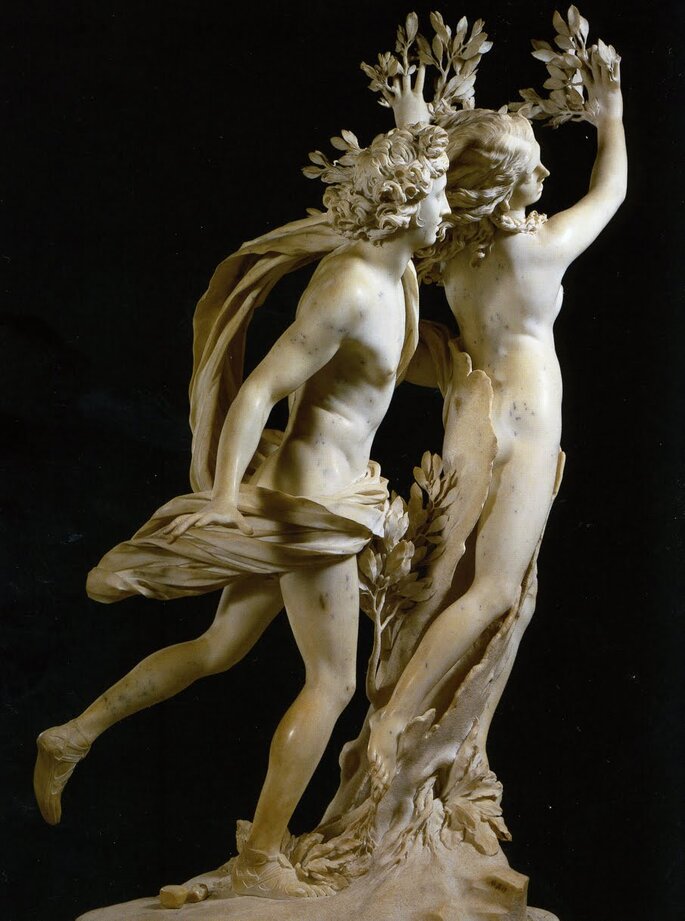 The Kiss, by Gustav Klimt

Klimt sought to capture the perfect interpretation of the human embrace in his most famous painting. Although the Austrian painter began his work after being strongly criticized in Vienna, the painting was sold before its completion and was part of the National Heritage. With The Kiss, the artistic movement of symbolism welcomes one of its greatest references, mixed with the opulence of Byzantine art that the artist loved so much.

Beauty and eroticism go hand in hand in this vortex of sensations transmitted by the couple’s kiss. In this way, the artist attempt to understand the delicacy and elegance that resides in eroticism, without the need to turn it into coarse visual language. Like a butterfly about to hatch, the couple resides in a kind of golden cocoon, immersed in their own happiness and intimacy, a union that is enhanced by the geometric shapes of both garments, symbols of connection between the two characters. Their stance at the edge of a cliff suggests some instability of the couple, leaving the painting open to further interpretations… 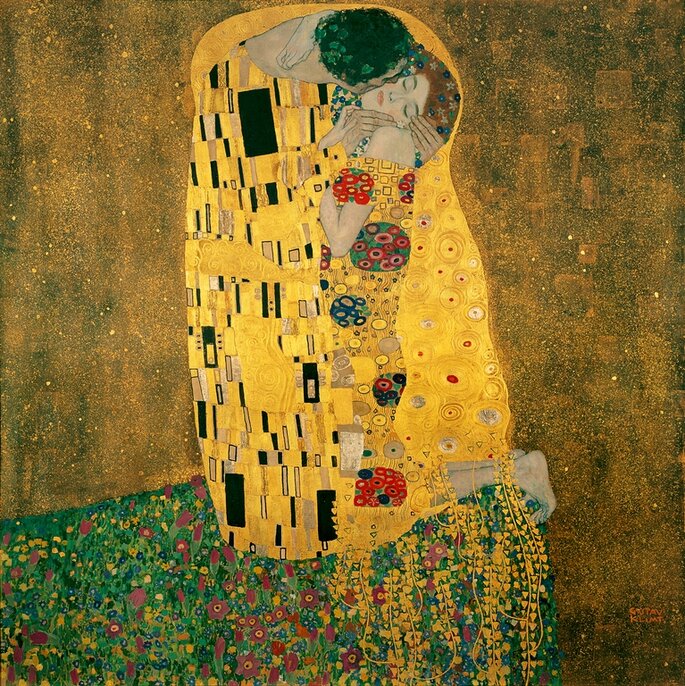 Photo: The Kiss, by Gustav Klimt

The Lovers, by René Magritte

As a totem of European surrealism, René Magritte delved into ambiguity and provocation to culminate his best and most beautiful work. With the painting open to debate, its meanings have circulated in theories related to the impossibility of love without physical contact or a metaphor of forbidden, passionate but incomplete love. The cloths on the heads and the seductive positions of the couple delve into the transgression and seek controversy, although sometimes it has been linked to death by suicide of the artist’s mother, whose body was found with her white and wet clothes on her face.

Although the composition and the message of the work remain encrypted in the profound and peculiar imagination of Magritte, the artist has taken refuge in one of his most famous phrases to explain his works: “The reality is as equivocal, incoherent and abstract as any painting”. If he says it, he will have to pay attention to it. 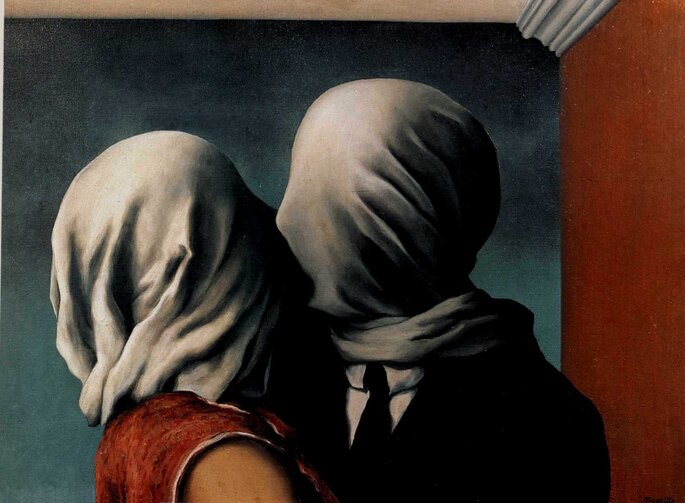 Photo: The Lovers, by René Magritte

The Lovers, by Pierre-Auguste Renoir

As a great representative of Impressionism, Renoir gave us works influenced by time, where each and every stroke was determined by light and colour. All the characteristics of this revolutionary movement appear in this painting, where man cannot escape her charms. At this moment, in the middle of that natural scenery, so typical of Impressionist works (remember Monet’s water lily paintings?), Renoir captures the grace of the moment, unrepeatable and pure like painting, which tries to grasp every sensation. Love, sometimes, is a matter of a moment. 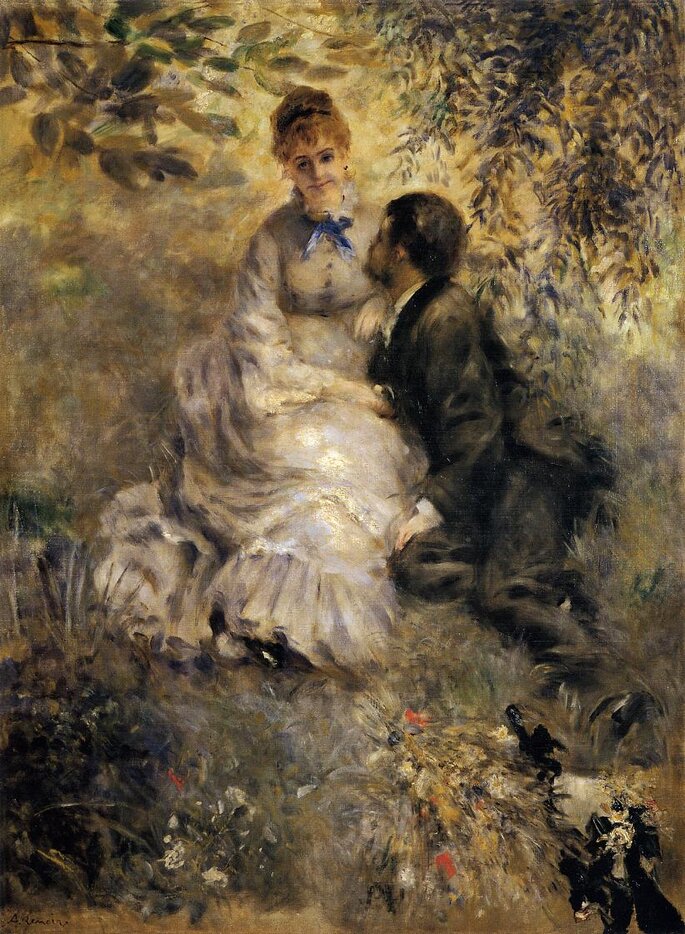 Photo: The Lovers, by Renoir

In Bed, The Kiss, by Henri de Toulouse-Lautrec

Despite what may seem, this seductive picture, described as “the epitome of sensual pleasure” by the author himself, represents two women in the moments before an act crowded with passion. The painter gives us that kiss full of symbolism, of sensory pleasure that, nevertheless, appears within the framework of a brothel; Its protagonists are two prostitutes who experience free sex. In this area, despite the place and the trade of the two people involved, we appreciate a clear tenderness that goes beyond the painting and, in a flirtatious way, invades and comforts us. Art is capable of finding beauty everywhere. 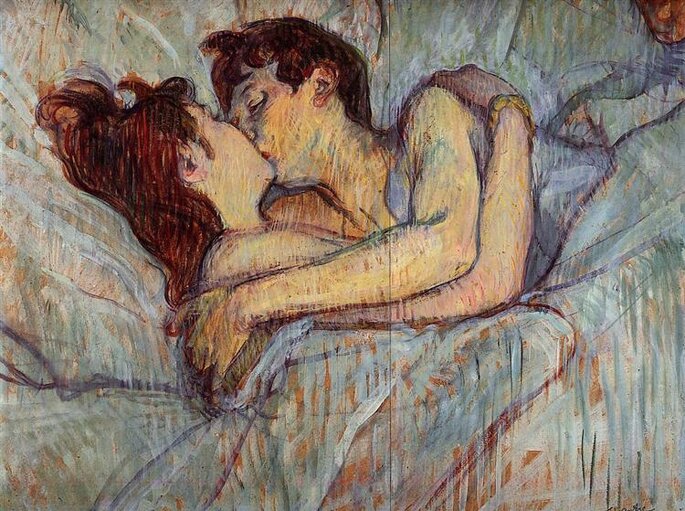 In Bed, The Kiss, by Toulouse-Lautrec

Why is this painting important to us? Because of the difference that it transmits with respect to today’s couples. The opulence of the room and the dresses, as well as the great number of elements (the oranges, the bed, the carpet…), speaks of a society with great chasms between classes.

The detail of the work has special strength, especially in the famous mirror that hangs at the back of the room, revealing a very different reality that highlights the virtuosity of Jan van Eyck at the time of thinking and capture. 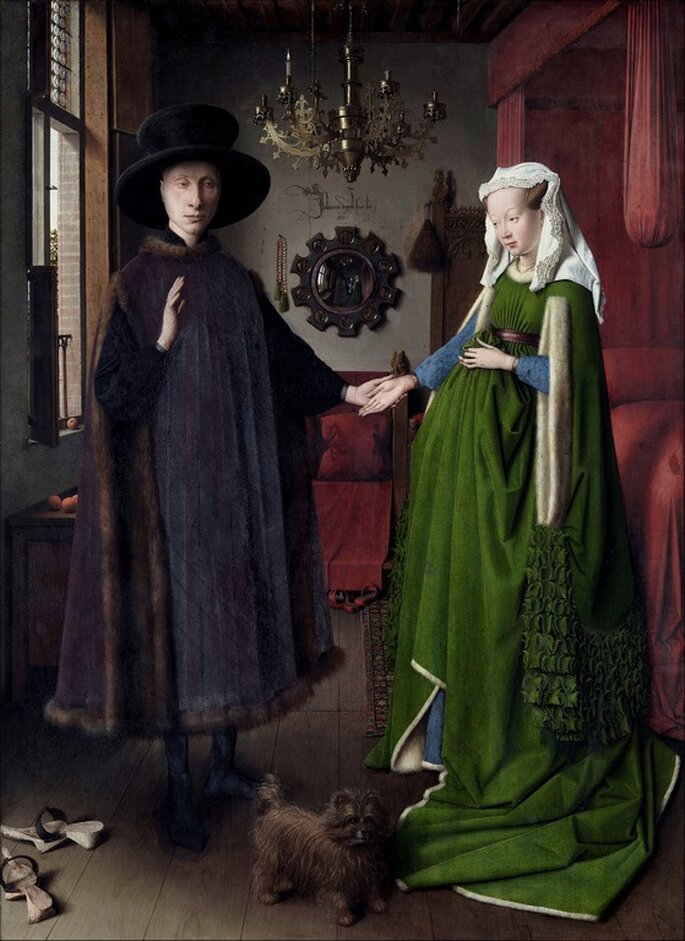 The Love Embrace of the Universe, the Earth  (Mexico), Myself, Diego and Mr Xolotl, Frida Khalo

The Mexican artist knew how to agglutinate simultaneously her admiration for the land that saw her being born (cosmogony of ancient Mexico and vegetation such as cactus, maguey and cactus), as well as her love for his partner Diego (he embodies the baby of the painting).

Khalo herself sad that she “would always like to hold him in her arms like a newborn child”; and one of her great traumas, which was her inability to conceive. All this installed in a duality that Mother Earth represents with day and night, cold and hot, masculine and feminine, all in a human and divine context. Love in all its splendor, with the beautiful and the grotesque, with the bad and the good. 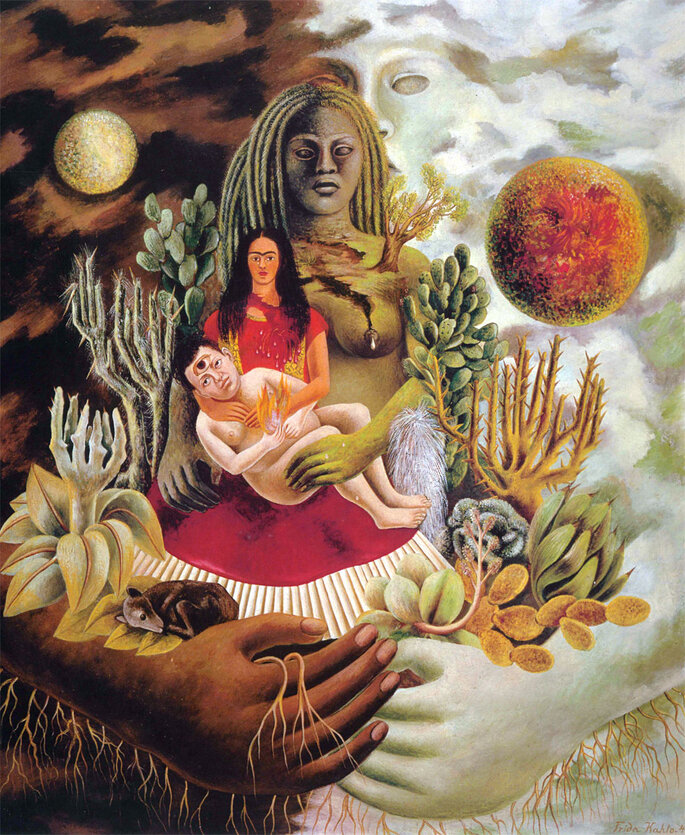 Photo: The Love Embrace of the Universe, the Earth  (Mexico), Myself, Diego and Mr Xolotl, Frida Khalo

Pop Art is the artistic style that catapulted success to cultural references such as Andy Warhol. The aim of this movement was to turn elements of popular culture that appeared in advertising, in the media, in comics or in movies into art. Within this genre, Lichtenstein was brought to fame with his Kiss II, his most important work, which gave rise to other pieces of great social significance, such as Kiss V, extracted from the number 97 of the comic Girls’ Romances. In them, a love story told by halves, reinforced in the comic with the rest of the vignettes, but incomplete in the works of the American artist. They emphasise the black and thick lines, the primary colours and the Benday points, that simulate the impression at high speed, but that Lichtenstein did by hand. Love, like painting, even the most groundbreaking, sometimes does not need an explanation to move. 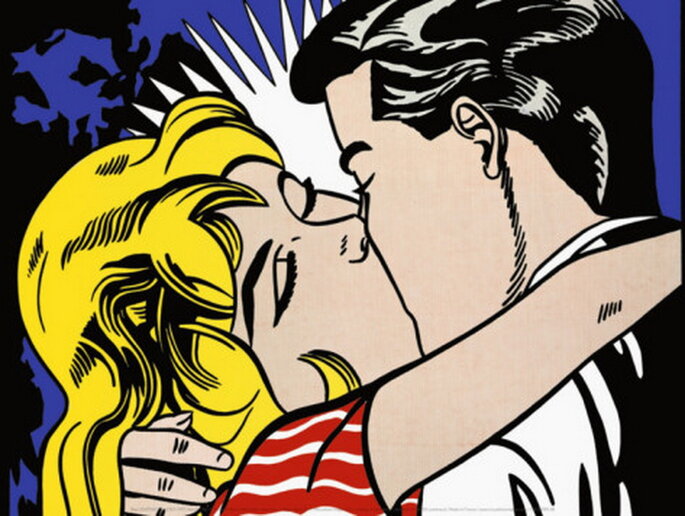 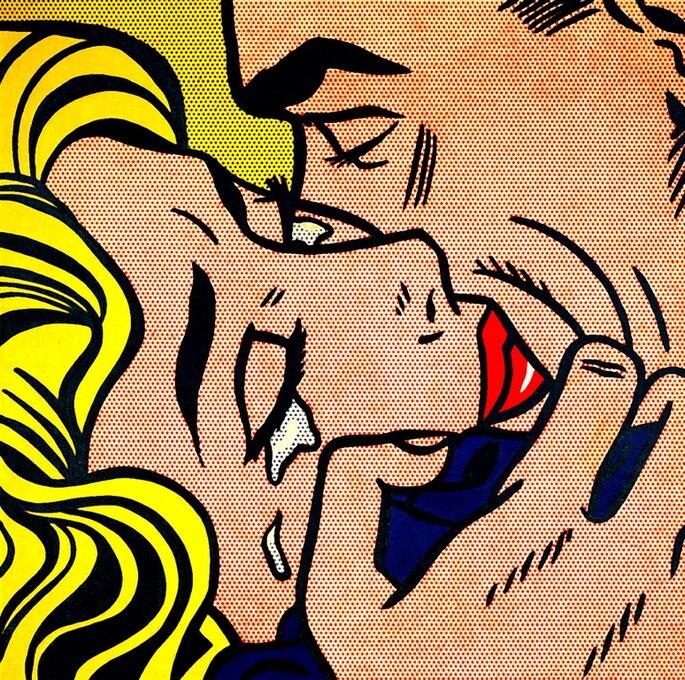 Venues
18 Jun 2021
Enjoy an unforgettable experience at Torre de Gomariz Wine & Spa Hotel, located in the north of Portugal and surrounded by nature so you can have a peaceful and relaxing time.

Destination weddings
15 Jun 2021
Discover a new realm of beautiful white sandy beaches, turquoise ocean, and an immersive jungle, with the modern and sustainable resort - The House of Aïa.

Med in Style: a stylish wedding with a romantic Mediterranean environment

Destination weddings
15 Jun 2021
Discover a wedding tailored to your dreams, set in one of the most beautiful locations in the Mediterranean.
39

Celebrate an intimate wedding in this beautiful, rustic villa in Tuscany - Podere Calvaiola

Venues
12 Jun 2021
Looking for a traditional yet beautiful wedding location? Podere Calviola will offer you the best services and suppliers for your dream Italian wedding, along with some stunning views!
43

Venues
31 May 2021
Proud to be living in the 21st century as Castello di Montignano displays the most beautiful, dream-like, same-sex wedding between Sarah and Sophia, who share their love with the world in a boho-chic fashion.

Giuvida Luxury Events: a selection of delicious original dishes as well as an open bar

The reception
13 May 2021
Transform your wedding dreams into a reality with an exceptional catering and banquet service like Giuvida Events.

Italy Inspires introduces the most exclusive locations in Italy and the best luxury wedding services to the world!

Destination weddings
13 May 2021
Italy Inspires brings together wedding planners, locations, suppliers, professionals and influencers of the luxury wedding world. Sharing experiences and inviting our guests to discover the infinite treasures of the most romantic country in the world: Italy!