Britain knows how to make good films. From rom-coms to historic dramas, this country is home to some of the movie world’s best directors and cinematographers. Alongside some great acting talent, one of the things that really helps to distinguish British cinema is its setting – from the bustling streets of London, to the vast rolling hills of the Peak District, there is a location or backdrop perfect for any scene. No wonder that the value of the cinema industry has grown over 72% since just 2014, with huge international films such as Wonder Woman and About Time finding their homes here.

With so many classic films boasting a beautiful British backdrop, it’s a common occurrence that we find ourselves wishing we could to the places we see on screen – and in some cases, dream about getting married there too. Zankyou is here to turn that dream into a reality, proffering up 6 of the most romantic locations from 6 of our favourite films as potential venues for your big day. And so, without further ado! 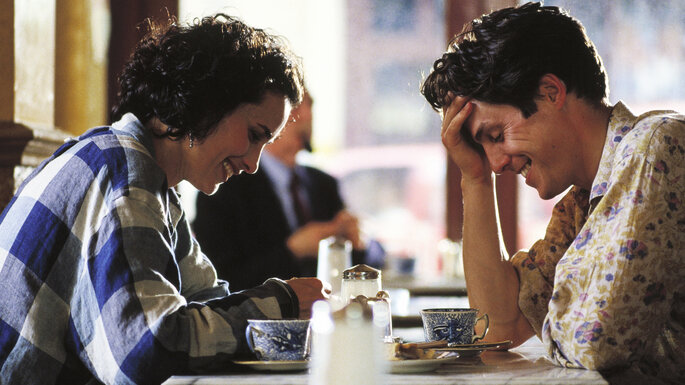 We all remember that scene in Notting Hill, don’t we? Hugh Grant, trapped in rush-hour traffic with his eccentric relatives, trying to get to the iconic London hotel to find Julia Roberts in time. Somehow managing to be both hilarious and exhilarating, the whole debacle reaches its peak when Grant finally stumbles into the Ritz and manages to make Roberts stay. The Ritz itself became a pivotal location for the rest of the film – including another brilliantly awkward scene where Grant has to pretend to be a journalist to avoid being thrown out – and is noted around the world for its superior quality, and deluxe amenities, including its bridal services…

With an in-house wedding planner available for every couple looking to marry, the Ritz offers a luxurious bridal package for potential couples, with the added bonus of being based in central London, near Piccadilly and Green Park – the latter of which could provide the perfect place for a post-ceremony photoshoot. The Ritz has carefully cultivated its esteemed reputation since its opening in 1906, and is sure to elicit a reaction from your guests!

The William Kent House is the venue available at the Ritz for hire. This stunning restored 18th-century townhouse has a variety of private dining and reception rooms, and provides a glamorous (but always classical) backdrop for intimate and large-scale celebrations – alongside the high standards of service that you would expect from such a place. A selection of menus from the Michelin-starred kitchen are available for all weddings, with locally sourced produce. And, perhaps most excitingly, the Ritz’ very own Rolls Royce is available to all wedding couples for their big day! 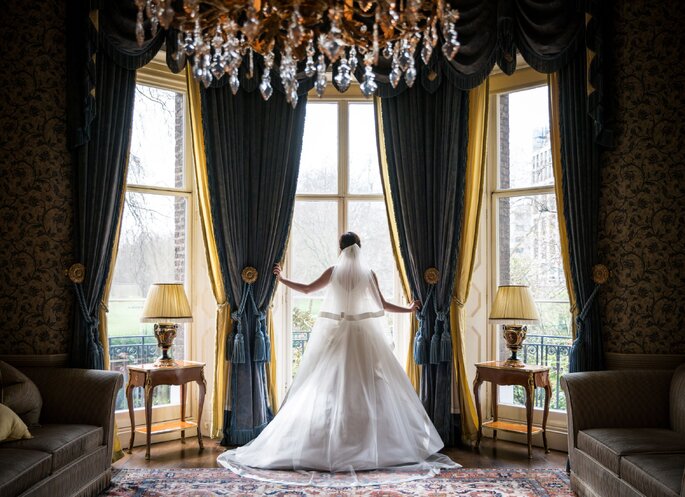 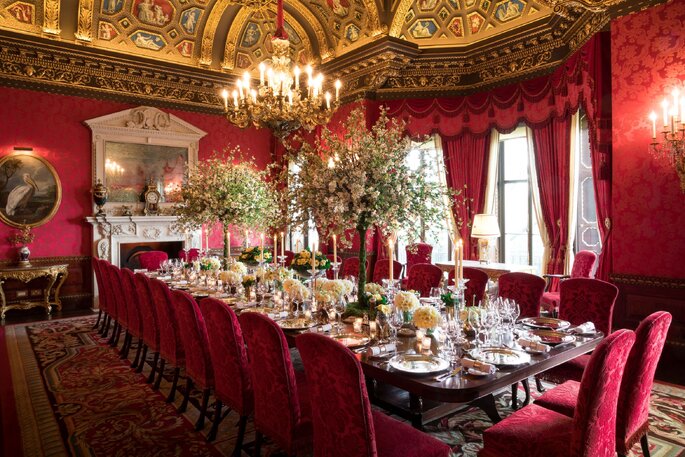 It was the moment we were all sat in the cinema waiting for with baited breath… when Hugh Grant, awkward and unkempt, in a role that would propel him to international stardom, and Andie MacDowell, the genuine American beauty, finally got together in Four Weddings & A Funeral. Perhaps one of the most grounded and realistic rom-coms, this film was a treasure trove for beautiful wedding destinations and venues, and rightfully made two lodges in Amersham, Buckinghamshire very famous: the Crown Inn, where the that four-poster bed and the infamous Room 101 can still be found, and the Kings Arms, whose Tudor-style black and white façade is easily recognisable amongst the background of the town.

Both of these venues are available for weddings, and are particularly attractive for couples looking for that rustic vibe and countryside ambience. With exclusive usage, the Crown Inn can hold up to 100 guests, and its neighbour the Kings Arms has a capacity of 120 people – the exclusive usage package itself allows the bridal party sole occupancy of all available rooms, meaning that catering can be arranged around the ceremony, and there is guaranteed space for guests. With an excellent on-site team, great service is guaranteed, and Amersham itself is on the London Underground network, and so is easily accessed.

Replete with character and charm, these two venues are both perfect for weddings; ceremonies can be performed outdoors in the open air, and the rich backdrop of Buckinghamshire – the jewel of the South East – provides a subtle touch of class and sophistication. The team are happy to work with you and make your wedding dreams a reality – all in two of the most famously romantic venues in Britain! 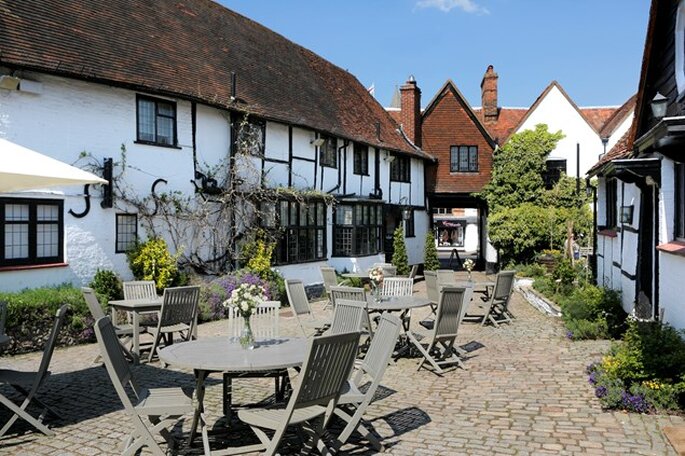 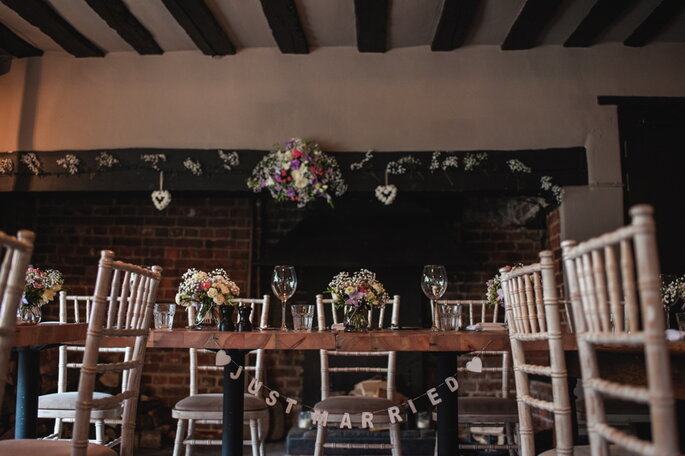 Grosvenor Chapel is the place where the gentle opening lines of the Beatles’ absolute belter All You Need Is Love kicked off one of the most widely-adored films in all of British cinematic history. Love, Actually redefined the rom-com genre for a decade, and indeed one of its most romantic scenes took place in this enchanting Mayfair chapel. With a full orchestra hidden in plain sight, Andrew Lincoln’s surprise for his best friend and his new bride was a beautiful note to begin with (though perhaps we can’t condone his motives for doing so!)

This handsome Anglican chapel has been operating in Mayfair since 1730, and is replete with history and charm, and also has a lovely garden room for photographs after the ceremony. You don’t have to be a resident of the area to be married here – only be present on the Electoral Roll – and the service here is very inclusive, with ceremony music, photography and floristry also provided by the church. Every year on Valentine’s Day, Grosvenor Chapel also holds a vow-renewal ceremony, which is always a touching event for couples looking to celebrate their many years together.

Grosvenor Chapel is very well connected to the London Underground for transport (and are happy to recommend local Mayfair reception venues), and boasts a spacious interior, with enough room for up to 200 guests. There is also a very romantic option to have your ceremony illuminated by candlelight! Bright and charming, this is the perfect place if you’re looking for a beautiful, but low-key venue for your wedding. 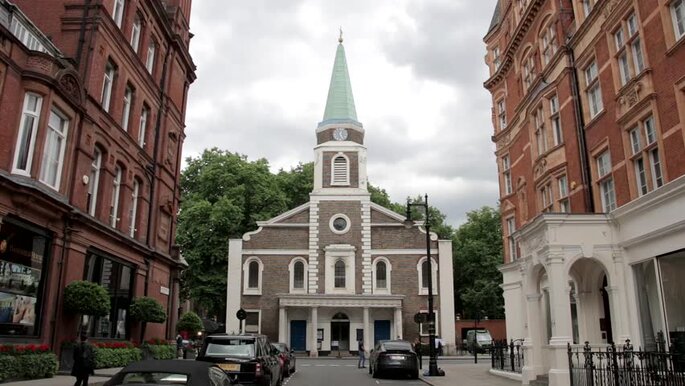 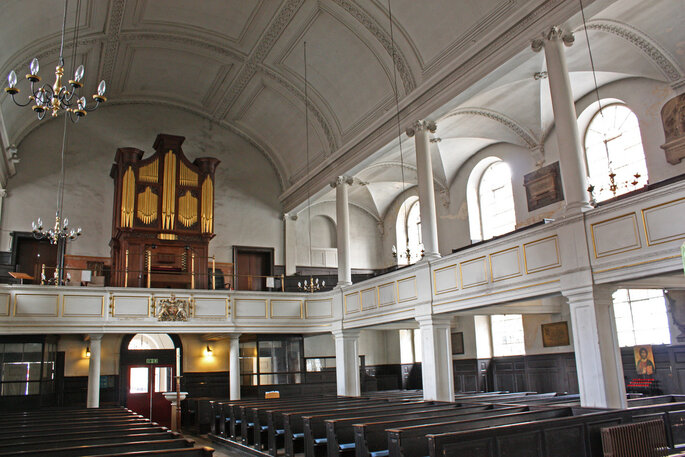 The backdrop for Bond classics such as Tomorrow Never Dies and Goldfinger, the Stoke Park Estate in Buckinghamshire is perhaps most famous for featuring in the absolute classic Bridget Jones’ Diary, the rom-com that changed the nation way back in 2001. The infamous, and frankly hilarious, scene where Bridget Jones and her playboy boyfriend (for the weekend at least) go rowing together was filmed on the grounds at this prestigious country estate, as were several other steamier scenes… The room used for the latter of these instances now acts the bridal suite for the hotel, and this huge complex houses a number of other features for weddings.

One of the features that we think couples will most appreciate is the in-house spa. What better way to relax before the big day than to chill out in a steam room, or to have your stress washed away in a cleansing massage? Additionally, Stoke Park has three possible locations for your wedding: the Repton, with a capacity for 27 guests, the Ballroom (as grand as it sounds!) which holds up to 100 people, and the Fountain Room which overlooks the gardens and fountain outside, with a space for 50 of your nearest and dearest. All of these interior rooms benefit from beautiful architectural features, and are perfect for your romantic civil ceremony…

There are plenty of catering options at Stoke Park, and one of their best features is their exclusive wedding cake service. Beginning at a very respectable £285 (which will feed 80 people), this Naked Wedding Cake designed by the on-site team is a lovely addition, and menus for the day begin at circa £200 for three courses. If you’re looking for the perfect luxury countryside venue, then there really is no better place! 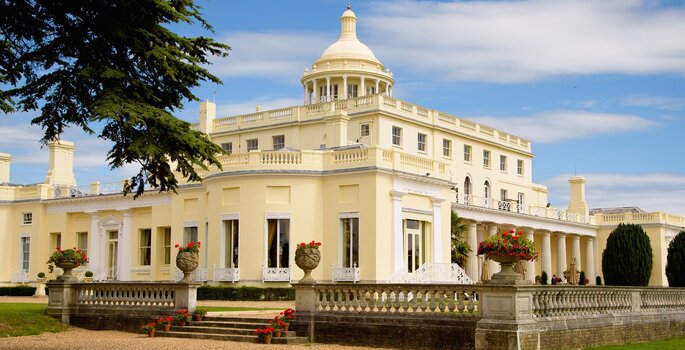 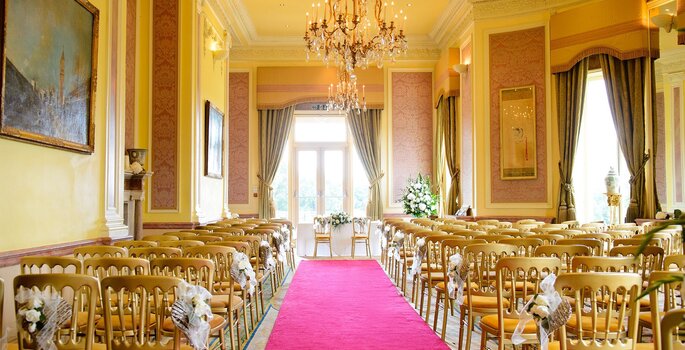 Hot on the heels of the hugely popular 1995 television adaptation of Pride & Prejudice, another new Austen production took place at Came House in Dorset. The 1996 film Emma featured the venue extensively as the titular character’s home “Hartfield”, and was a fitting location for a family as wealthy as the Woodhouses. However, the full extent of the venue’s beauty was not explored in the movie, and the house is currently closed to the public – making it the most exclusive of all of the venues explored so far in this article! Extensive renovations have been implemented by the owners, and the space dedicated to weddings leaves room for 20 guests to stay over the weekend alongside the couple.

Came House was built in 1754 and still retains many of its original features, making it an ideal historic venue for traditional wedding ceremonies. There are several places where the ceremony can take place within – including the Drawing Room, which has space available for 75 guests – marquees and similar constructions for up to 300 people are permitted upon the lawns for an after party that you won’t forget! Planning is provided by the team at Bellissimo Weddings, who have unique rights over the property in its capacity as a wedding venue.

Extensive gardens, huge open fires and a welcoming atmosphere will ensure that your wedding here – a mere 10 miles from the gorgeous Jurassic Coast – is a memorable one. Food and drinks can be arranged with the planners at Bellissimo Weddings, and it is worth splashing the cash for such exclusivity as you will receive from Came House. 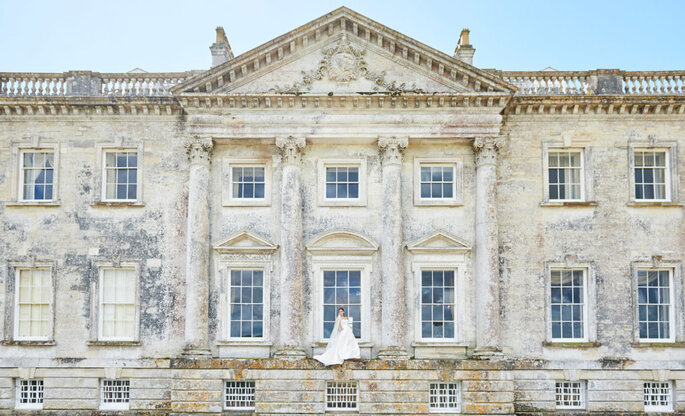 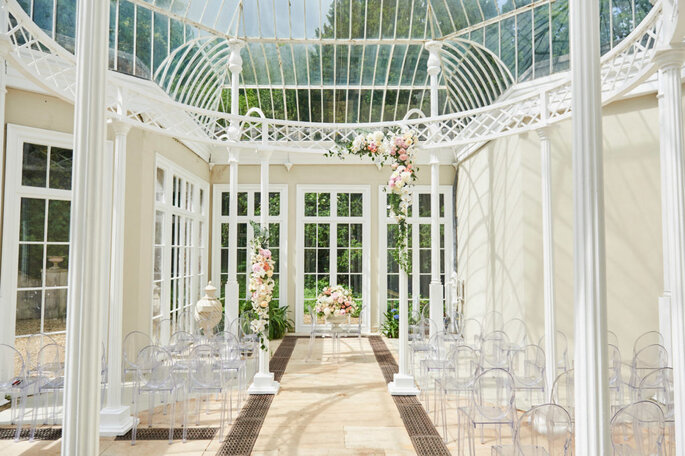 Possibly one of the most famous wedding scenes in British cinematic history was when Pierce Brosnan unexpectedly – and quite out-of-tune (but we’ll forgive him!) – proposed to Meryl Streep after her onscreen daughter decided to not get married, having met all three of her fathers. Though only featuring in the film for ten minutes, the location of this tiny Greek chapel – on top of a large barren rock, with the most incredible panoramic views in Skopelos – became hugely coveted for destination weddings, particularly after the aerial shots during Streep’s moving rendition of the Winner Takes It All… Though not based in Britain, we could not exclude this venue from this article!

The chapel is located at the island’s peak, with 198 sturdy steps carved into the rock for access. It is dedicated to Saint John, after his visage was discovered at the site by an islander who saw a bright light on top of the abandoned landmass, and built a church there in his honour. The scenes you see in Mamma Mia! were shot on set – the Agios Ioannis chapel itself is quite a lot smaller, and only available for Orthodox weddings, but you can also marry in a civil ceremony at the base of the rock, and then travel upwards for photos. If you want to get married here, you will have to liaise with a wedding planner in the area, as the church cannot be contacted online.

With crystal waters and a majestic landscape, there is simply no place more beautiful to have your wedding ceremony. It is 5 miles from the nearest town – Glossa, an intimate village of 1,000 permanent inhabitants – but can be easily reached via car. Surely the travel is worth it for the experience of getting married in such a special place! 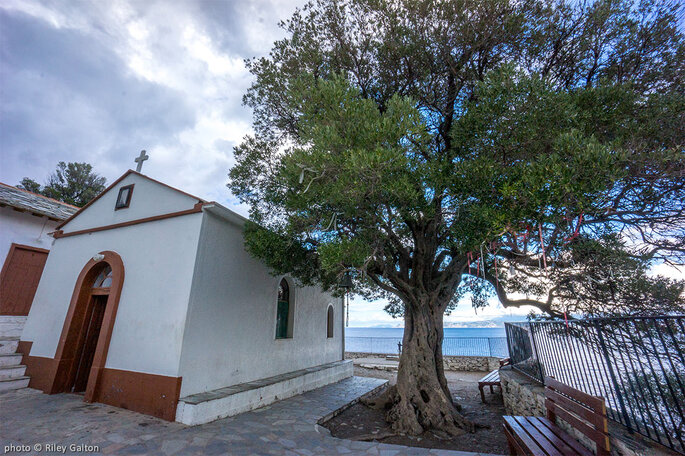 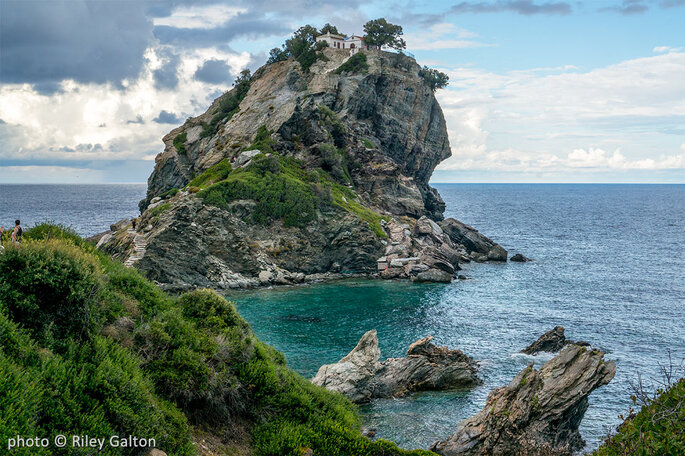 If you’re still stuck for ideas on venues, check out some of our other articles!

The Top 4 Country Houses in the South-West

How To Choose Your Wedding Venue in 5 Simple Steps

Lavish and Luxurious: The Castilla Termal Monastery of Valbuena

Learn more about the suppliers mentioned in this article 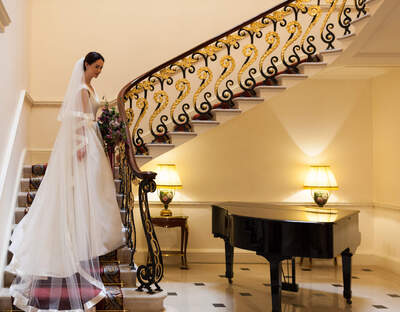 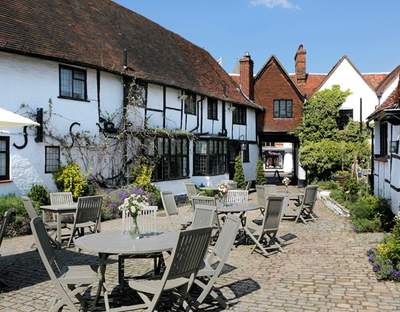 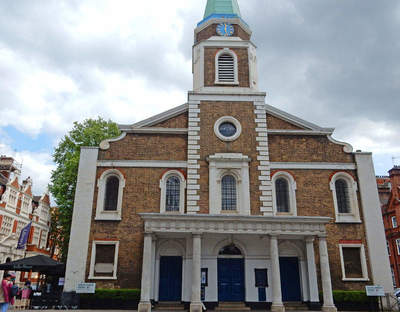